Falling Apart at the Seams: The Gaping Wound of Inequality

I recently watched the documentary Inequality for All with Katie and her mother over the holidays.  I was hesitant because from Food, Inc. to Inconvenient Truth, social documentaries usually leave me in a depressed slump.  Yet, I found myself surprised and inspired by Inequality for All because of it's clear-cut economic analysis and piecing-together the complicated story of income inequality.  The bottom line take-away I had: 99% of us are getting paid less to do more and this gap started in the 1970s and has dramatically worsened since causing negative consequences far and wide. 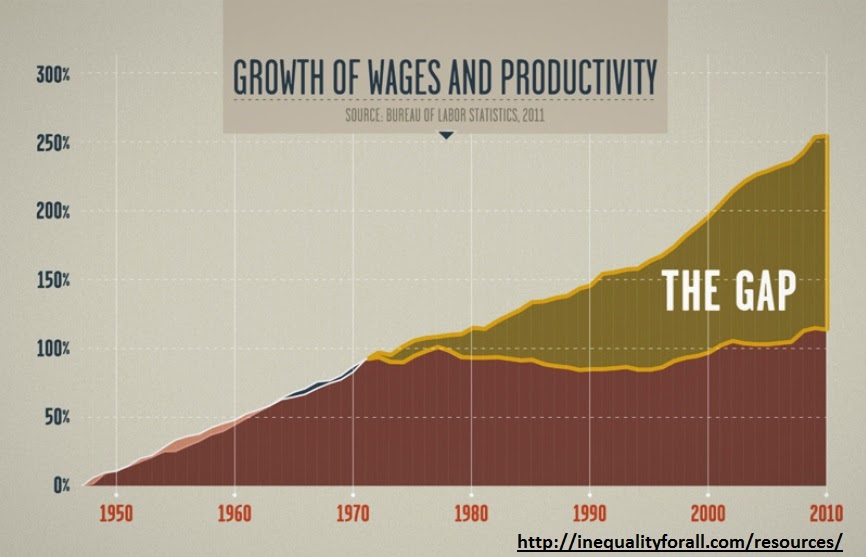 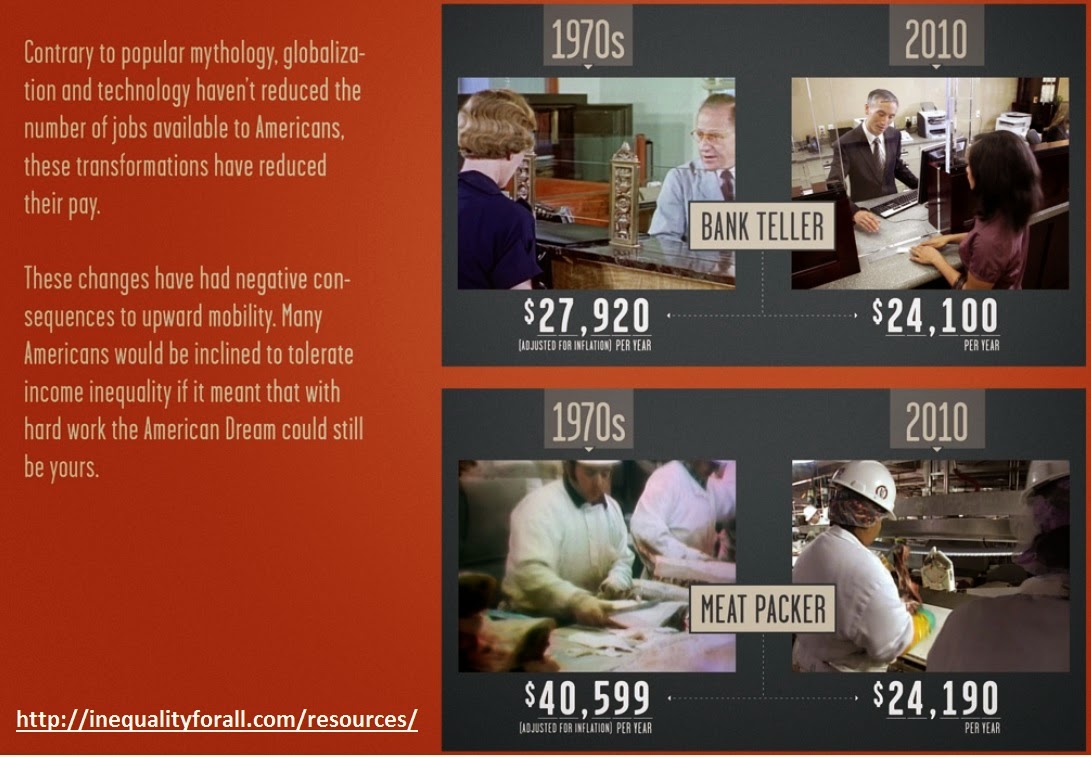 Let me restate this: to do an honest day's work, the premise of the post-World War II "American Dream" branding, now gets you less today than it did in the 1970s.  Race and gender, sadly, still play a significant factor for income disparity on top of this, but it is ultimately class from the poorest to even the middle-upper class wealthy which unites us in a systematic depletion of our money and time.  Thanks to deregulation the wealth is gushing upward to the wealthiest citizens, who are often using it make it easier to retain even more wealth (see the Koch brothers as a classic example).

This restriction on available resources for the rest of us result in growing tensions.  If you have to work longer hours to feed your family, how will you find the time or money to get civically engaged?  Not just with educated voting, but education in general, engaging with NGOs, or even community events?  Or even just the time to have interact with your neighbors beyond an occasional hello?

When opportunities of intersectionality within one's own community become more limited, they aren't exposed to new or challenging ideas.  The ability to take the time to understand detailed viewpoints become withered down to Slate A or Opinion B.  Once in this boxed frame of reference, one can easily lose sight of the overwhelming commonalities of those around them.  Then, especially if one is the subject of countless generations of oppression for their skin color or gender or class and within this system of ever-restricting opportunities, how can anyone learn to trust each other outside their innermost circles?  Those who aren't in one's 'category' become scarier, and scapegoating and stereotyping becomes easy from all angles.  Neighbors can then become the enemy.

I am reminded of a story of the murder of a Canadian filmmaker working for the U.S. Department of Commerce during President Johnson's War on Poverty, putting a sharp focus on impoverished Appalachia (watch from 35:25).  Hugh O'Connor was filming his last shot for the day of a father play with his son on the front porch after a day in the coal mines, when the company housing owner rushed up with a gun and demanded he leave.  On his way to the car, O'Connor was shot and killed.  The case went to the courts in which the journey of the local community felt threatened and even ridiculed by all of the attention from the War on Poverty, and thus gave a light sentence for O'Connor's murderer.

Yes, police brutality is real and dangerous.  Racism is very much alive and well-- Ferguson is a household name now on these points, whatever the perspective.  Sexism is still very much here, too, and equal pay between genders still isn't law in 2015.  To me, these are very grave issues often putting blame and working to undercut one another within our communities.  Yet they all are intertwined with the most deadly of all-- the systematic undermining of our ability to meet our own needs for the benefit of a very manipulative few.  Income inequality is our gaping, gushing wound, pulling us further and further apart from our own humanity.  Addressing anything but this inequality first is just toying with band aids.


--Coming up, I will explore the ongoing housing and affordability crisis in Denver.--
Posted by Unknown at 8:49 AM No comments: