Talking about the End of the World as we Know it

I regularly find myself in personal conversations with folks who end up wide-eyed when I tell them some of the environmental devastation that is happening across the globe.  I talk about everything from the collapse of fisheries, mercury and toxic contamination, radiological risk and exposure, sprawl development, women's rights, electricity grid capacity, renewable technologies, smart-growth ideology, transportation networks, Web 2.0 and the cloud, money in politics (across the spectrum), advances in medical technology, brain development, overpopulation, etc., and go into how they impact society at a local, national and global scale.  More importantly, I then explore how those impacts are interconnected with each other and the environment.

Most of the time people are on the edge of their seat, never having heard of the issue I speak of, and are asking me a million questions a minute to go further.  On a rare occasion, though, that initial interest turns ugly when I explore the interconnectedness of an issue.

Particularly, I'm always dumbfounded when I hit a wall in a conversation with someone talking about how the environment I'm working to protect "out there" is no different than the one "in here" that make up the walls of your home and everything within them (even you).  Sometimes that conversation not only gets uncomfortable, but downright upsetting for the person I am talking to.

For others the wall comes up a layer deeper if I end up talking about the potential technology of downloading our minds into computers, modifying our genetic fingerprint, or creating artificial intelligence.  We already are at a day when we can begin to download images of what someone sees from the brain, control robotic arms with the mind, find out early in a pregnancy if an embryo has genetic defects (and can tell if they're pregnant from their shopping habits), and (if we really wanted to) have a pet glow-in-the-dark-cat.  What might be around the corner?  More importantly, what impacts will it have on our society?  How will it change our values?

Example: China's one-child policy, cultural favoritism for males, and the ability to determine the sex of an embryo led to abortions of those of the female sex.  Today, China is facing a skewed male-female demographic ratio that will have significant societal ramifications in the coming decades, likely to impact economies across the world, human rights, and environment in ways we can only begin to imagine.

So, I often wonder, why do folks feel uncomfortable or even hostile when if we start diving into these topics, particularly in how they are interconnected with other areas?

In trying to piece together this idea, I realize there is a striking example today that everyone can relate to on this matter: climate change.

Why do people get so upset with the fundamental science of it?  We're burning unfathomable amounts of stuff whose material ends up floating and staying up in the sky for long periods of time, allowing heat to be kept there longer which changes local weather events accordingly.

In 2006, after An Inconvenient Truth spelled out the challenge of global warming, around 70% of the public agreed human-caused climate change is real.  By 2009 that number dropped to just 36% despite 84% of scientists reaching consensus on the matter, an impressive feat. 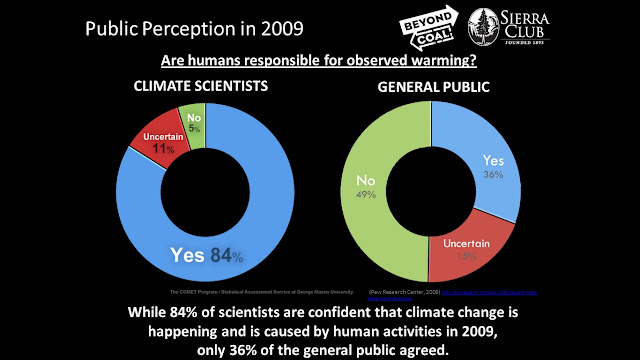 Putting aside the media and perception war on science of the last six years since Truth ('Climategate' was investigated by 8 diverse panels and all found no evidence of fraud or misconduct), I wanted to know why this decline in perception happened.  It doesn't make sense once you know how a concept works, you shouldn't be able to just easily unlearn it (Hey! The Law of Gravity is a lie!  Gravitygate proves it!). This perception change is an effect on society, not a cause.  I keep thinking, how can I go upstream and figure out where the source is?


It's here that I recall a special group learning class I took at Virginia Tech.

I was part of a two-year cohort curriculum funded by the National Science Foundation called Earth Sustainability.  Each semester had a different theme: Water, Energy and Shelter, Agriculture, and then a capstone.  Each week we had a presentation from one of our several professors or a guest (including economists, artists, farmers, nuclear engineers, etc) to talk about a subject matter.  Then we would meet twice more that week to discuss that subject and work on research projects.

In having such a diverse background of professions and perspectives presented in this class under the same theme of sustainability, I found myself connecting various concepts more easily.  In fact, that was the point of the class as this wrap-up summary explores:


"...ES students’ ability to use two or more disciplinary lenses to inform an interdisciplinary problem had, on average, advanced from naïve to apprentice levels over the two year ES program.  Exit interviews with ES students indicated that most had developed confidence in their ability to integrate and transfer content knowledge within and between disciplinary areas and had gained an appreciation for the value of multi-disciplinary ways of knowing (well outside their majors).  The vast majority of those interviewed attributed their experiences in the ES learning community to development of these skills.  This finding also was observed during exit interviews with graduating seniors who had completed the ES series two years earlier." (source)

The ES program brought together both group and conceptual learning methods which led to our class achieving higher learning standards than a normal college student.  In fact, during the wrap up of our class cohort, our professors presented graphical data showing significant increase in every learning realm compared to students who are not in the program.

After the two year program I further embraced the idea of the class, taking a just-created major designed to compliment its interdisciplinary nature called Humanities, Science and Environment.  In the core classes we regularly discussed technology and ethics.  I had flexibility to take on independent studies to explore and document the impacts of coal in the region.  I even took a service-learning class where we taught young children basic environmental concepts through after school fun and games.

It was in the last class where I learned in more detail about the different stages of cognitive, or mental, development and how they actually apply to one of the goals of the Earth Sustainability program.

Now was I a physiology major?  Nope.  I am throwing out the names of each stage and could be significantly off with the above definitions given my primary reference is from the class years packed away someplace unknown.  I did some Googling though, and feel the above is at least conceptually accurate as here's what I found:


"Only about 17% of the population, those with an IQ above 110, use Formal Operations [adulthood mentality] on an everyday basis. And only about 5% of the population reach the final stage of Formal Operations, true formal thought, and probably about 2% continue to develop at the Postformal Level. Of them, about 0.1% go on to complete this process. This is mainly because a person needs to be in an educational or otherwise stimulating environment, until he or she is about thirty. Most university students leave university after gaining a first degree at between the ages of twenty-two to twenty-four, so the process of Postformal development all but ceases, unless they continue to work in an intellectually stimulating environment."  (http://www.trans4mind.com/mind-development/stages-development.html)

With this knowledge and my own background, I've come to these conclusions of the cause of why public perception is so malleable on topics such as climate change:

So when I have conversations about these issues, why do those walls come up?  A lot of these concepts are intimidating, not only on how complex they are, but also in the fact that we are fundamentally talking about the end of the world as we know it.  Folks haven't truly engaged their minds on the process of seeing the connections of an issue beyond basic knowledge (i.e. protecting the environment is good for air quality vs. how using environmentally friendly products in building materials and day-to-day use of your home will protect your and your family's health from toxic exposure and reduce your dog's risk of cancer).

Furthermore, people are exhausted.  We're over mediated and in a constant state of anxiety.  No one wants to spend any more time than they have to on an issue because it feels all the more overwhelming.  Unless they grew up in an educational environment that promotes interdisciplinary learning, the majority of people don't understand or can fully appreciate the importance of the interconnections in various fields of study and find it a tiring task.

Finally, we're individualistic as an society.  Environmental issues, despite being connected to everything in our society, is a very personal and independent concept for folks.  There is a perception of choice in regards to the environment (i.e. jobs vs. environment), when in fact every decision we make as an individual and as a society make environmental impacts.  You can walk or drive a car.  You can buy local foods or an apple from New Zealand.  Your furniture can be built from old-growth forest or sustainably harvested wood, or picked up used at a thrift store.

So when talking about the environment, folks can take it personally because they feel it is a choice for them.  With the help of media, sides are created to promote the concept of choosing a side on an environmental issue such as whether climate change 'exists' or not, despite all evidence on the contrary.  Some might as well proclaim the Earth flat and center of the universe.

Given the knowledge I hold, I see myself as an educator for those that want to listen and hear what's happening and to share it themselves with others.  It is only through those intimate conversations or in a community learning setting that a level of comfort and familiarity is created to promote deeper learning.  I am often overwhelmed and feel isolated by how disconnected the public is from the deeper issues we face and how they connect, but things can change one conversation at a time.
Posted by Bryce Carter at 11:30 AM